Mass-participation artwork Processions took place on 10 June 2018 to mark 100 years since the first British women got the vote. NCA Board member Cassie Chadderton from UK Theatre took part in London. 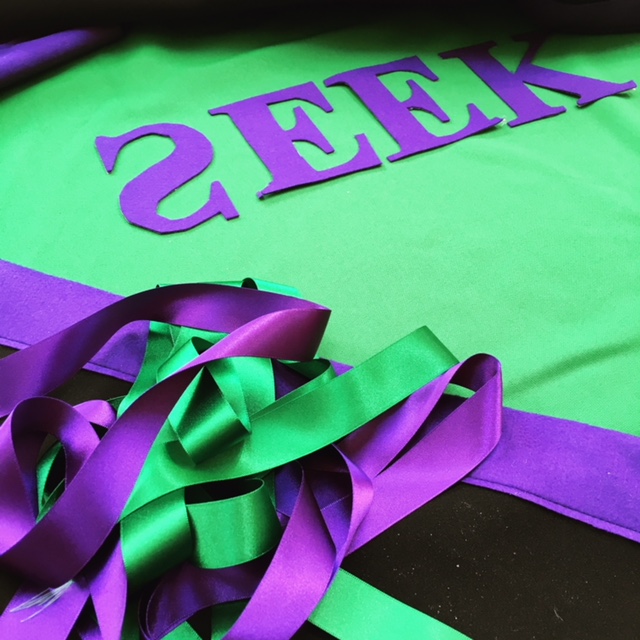 When I saw the first tweet about Processions I was giddy with enthusiasm. I’d held a candle for The Sultan’s Elephant – an incredible, joyful, spectacle of outdoor theatre since seeing it in 2006. It was the first Artichoke artwork I’d ever come across and the opportunity of taking part in another, Processions, was too good to miss.

My daughter was 3 back then. Now she’s 15 and full of feminism, so to be part of a unique work of art commemorating 100 years of women voting felt like a good thing to do together. It was far too good to keep to ourselves, so my sister and niece joined us. Then they roped in a couple of friends and then we were a group.

A celebration of speaking out, of making your opinion and presence count

Processions encouraged everyone to make their own banner, as a ‘living portrait of women in the 21st century’. Left to me, our banner would have been a slogan written, probably in neat handwriting, on a bit of cardboard, but in a group we had more skills, and more ideas.  My niece Elouise designed the banner, inspired by the work of her mum Zoe who is a midwife and friend Natalie, a breast feeding mentor. The final result was magnificent; a splendid green, purple and white banner encouraging support for mums and babies to breastfeed in public, bedecked in glittery crocheted boobs. We’d made our own wonderful work of art!

On the day we bumped into some neighbours on the train platform, so by the time we assembled our banner at Hyde Park corner we’d become even stronger. As we walked past the park we joined other groups, and other people, and by the time we had streamed Park Lane decked in our green, purple or white, we were a shifting yet single, suffrage commemorating movement.

Our banner held its own surrounded by some truly brilliant craft works, sharp and witty slogans, and some hilarious provocations.  There was singing, there was chatter, there was a joyful sense of coming together to celebrate something we all value. We took turns holding the handles, we talked to other people taking part (I bumped into various theatre organisations and friends, including NCA Chair Sam West) along the way.

A conversation about our past, reminding us of what’s important for our future.

Having the freedom to congregate in the name of something, to come together to show strength of feeling and opinion, is a vital thing for democracy. I used to feel a bit odd, when as a kid I’d tell them at school on Monday that we’d gone on a coach to London for a CND march at the weekend. So I loved the way that Processions was a celebration of speaking out, of making your opinion and presence count, and of doing this as a living, breathing, chanting work of art.

Processions was any number of things; a moment to celebrate our suffragist and suffragette sisters, a chance to recognise our hidden craft skills and to be in awe of the inventiveness and creations of others. And it was a genuinely (and literally) moving piece of theatre and art. It was art doing what art does so well; bringing communities together to have a conversation about our past, reminding us of what’s important for our future.

Mass-participation artwork Processions took place on 10 June 2018 to mark 100 years since the first British women got the vote.

Thousands of women dressed in the green, white and violet of the suffragette movement marched together in London, Cardiff, Edinburgh and Belfast.

Participants were invited to create their own banner celebrating women’s lives and issues, past and present. Event producer Artichoke commissioned 100 women artists to work with women’s groups as varied as women at Holloway prison, the Scottish refugee council and young mothers from Southend to create banners.