We were invited to attend the launch of a new book ‘Smashing It: Working Class Artists On Life Art And Making It Happen’. Our Exec Chair Michael Smith went along and tells us what he made of the evening (and the book). 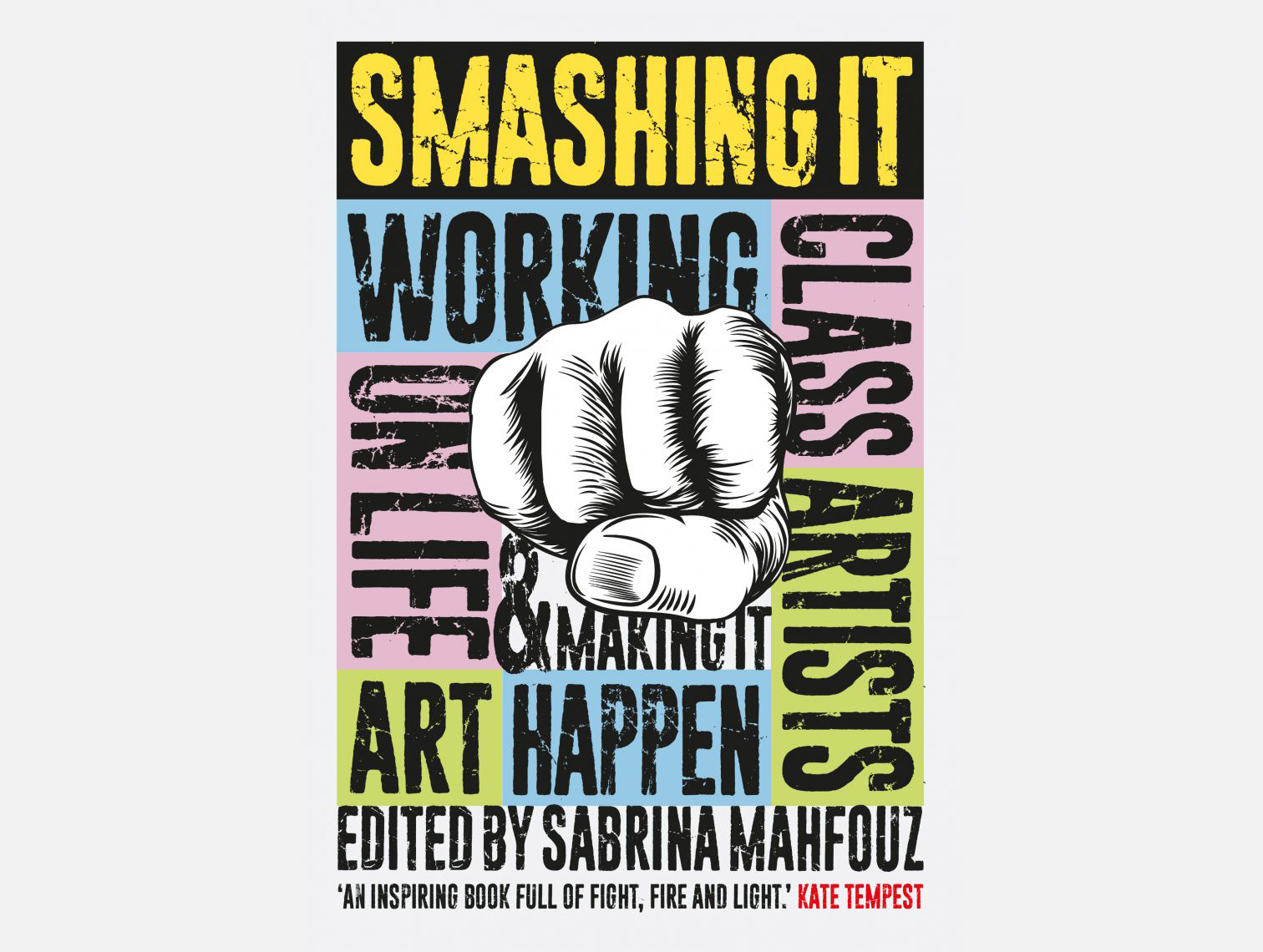 On Monday 23rd September, I was in the Purcell Room (at London’s Southbank Centre) for the launch of a new book. Smashing It is an anthology of essays, poetry, illustrations and clear practical advice from a working class perspective. The book is filled with ideas for how to smash it and break into the arts.

Edited by poet and playwright Sabrina Mahfouz, the book breaks into three parts – ‘art’, ‘life’ and ‘making it happen’ – and features the words of 30 artists, including Wiley, Malorie Blackman, Maxine Peake, Riz Ahmed and Michaela Coel.

I was there in my role as Exec Chair of the National Campaign for the Arts. The book’s publishers had put my name on their guestlist. Thanks Saqi Books, it was a great night.

Class is a hot topic in the arts at the moment. The sector is already hugely skewed towards the middle and upper classes and it seems to be getting ever more difficult to break through even the glass floor.
We’ve seen huge falls in the take-up of creative subjects in state schools, many subjects are being cut from the curriculum and marginalised into extracurricular activity that many parents cannot (or will not) fund. Conversely, private schools are promoting the arts as a key component in a rounded education, and their students go on to represent a disproportionate percentage of practitioners, leaders, decision makers and audiences.

The stories that shape our perception of the world are told to us from broadcast media, in middle class voices, from a middle class perspective. And, as more than one speaker at the night’s event told us, even the working class stories have been appropriated, repackaged and retold by those middle class practitioners.

This book attempts to address some of that imbalance.

I hold my hand up to a special interest in the subject. I’ve written elsewhere about my views on the educational vandalism of the English Baccalaureate. And I balance a sometimes weighty working class chip on my shoulder.

The event had a low key start, with the ‘performers’ seemingly a little shy about coming on stage.
The evening’s host, Welsh-Egyptian TV presenter Omar Hamdi, settled everyone down and introduced the tone and structure of the evening. We were to have readings from the seven people on stage, followed by a panel discussion with another group.

Omar is a stand-up comedian and used those tropes to interact with the audience – ‘give me a shout if you’re working class’ [a cheer throughout]… ‘shout-out if you’re middle class’ [a couple of brave shouts]. ‘OK, let me know if any of you shop in Waitrose even when it isn’t a special occasion’.

Bashing the middle classes isn’t really what I’m about but the rest of the audience seemed to enjoy the humour. I suppose it’s rare to hear that kind of banter in the Southbank Centre.

First up to read was the poet Joelle Taylor. She read from her work Gutter Girls, one of her two contributions to the book. The piece is about ‘poor women’ and the crimes committed against them. She tells us that the work is drawn from her time as a sex-worker – ‘a shit one… there’s something for everyone, eh?’

Second to the podium, with a little assistance given her 85 year-old frame, was Maureen Duffy. She decided not to read from her work in the book (an extract from That’s How it Was). Instead, she spoke about growing up in Stratford and read from her work Knickers.

She spoke with the clarity of a life-long performer and campaigner, raising herself up to the podium. It was rather poignant as she neared the end, her voice gently faded as she relaxed away from the microphone.

Am I working class or am I just black? Emma Dennis-Edwards posed the question that is the title of her essay in the book. “I asked my ex-housemate Janet, who’s also my mum” explained Emma. She spoke with humour and honesty about the signifiers and difficulties of defining class. “Does a garden and a kitchen-island make you middle class?” got the biggest laugh of the evening.

But it was probably the note that owning a lot of Burberry is both an indicator of working class and middle class that made me think most. It ain’t what you wear, it’s the way that you wear it. 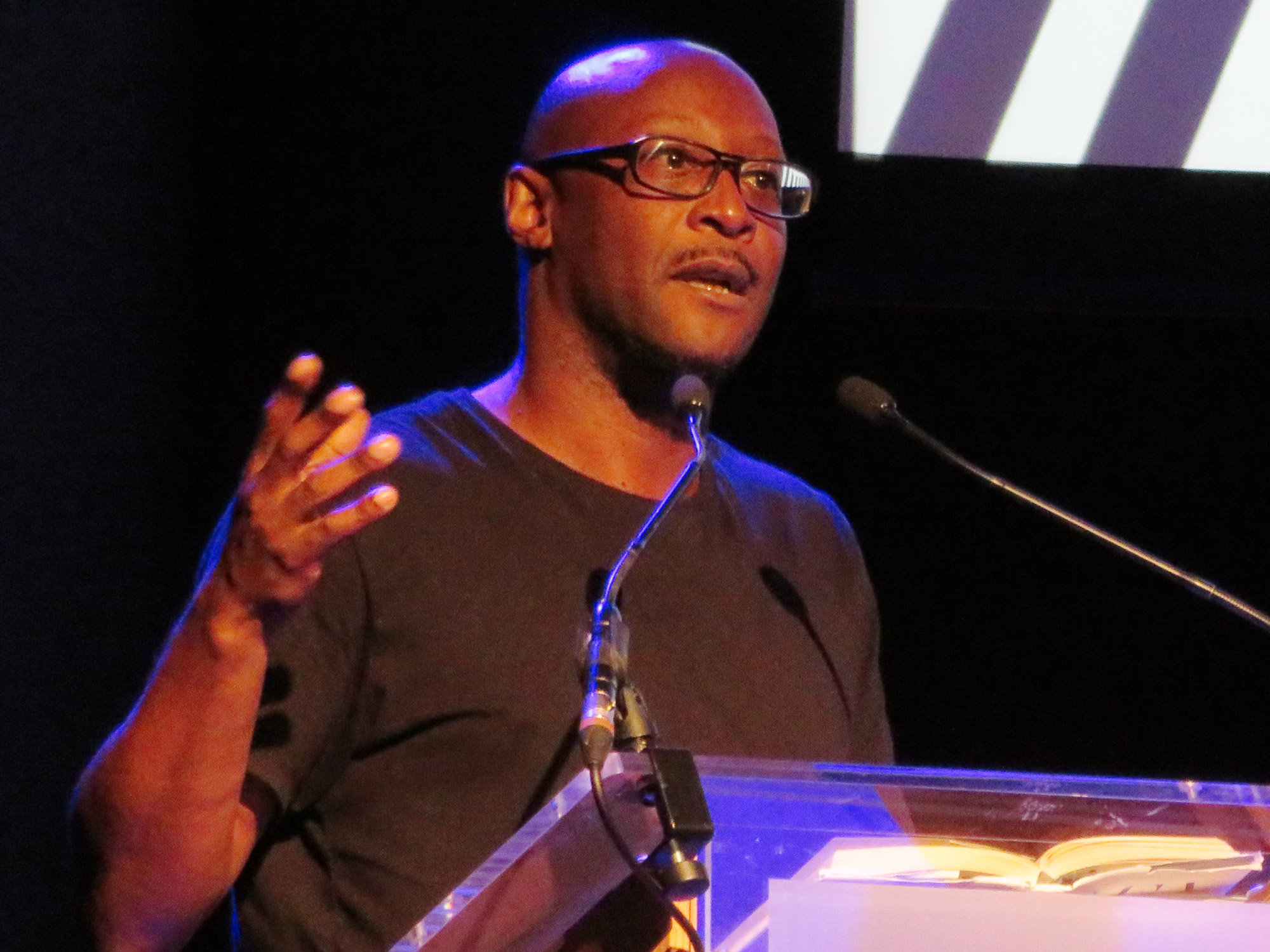 In the book, Courttia Newland writes about music cultures in London, and particularly about how that influenced the black, working class fiction that is beginning to emerge into the mainstream.

But tonight he read from his powerful piece, Reversible which tells the story of the police shooting of a young black man, but in reverse… with tape being wrapped neatly onto a roll, guns being placed into holsters, policemen getting into vans and driving away.

Fran Lock looked like a rockstar in her leather jacket. She explained that she was far too hot in it but she loved it so she was going to wear it. She read from Cohort, a complex poem (published in the book) about those who will never normally be celebrated through poetry – the homeless and the marginalised. At least, I think that was what it was about, it was quite dense (or I am) – I’ll need to read it through a couple more times, just to be sure.

Travis Alabanza was fabulous. They were there to read from the inclusion titled: Resolutions for the common, black, queer, young kid (and anyone else who may need it) but began by launching into a rant about the stinginess of the rich – “I didn’t know what greed was until I met posh people”.
Travis spoke about the ways that everyone’s stories are appropriated by the privileged – “rich people take our traumas and turn them into BBC dramas”. Quick-witted and very funny, they quipped “Intersectionality means there will be jokes coming from all sides”.

The piece in the book is very funny (and genuinely empowering) and I’ve booked the last seat for Travis’s play Burgerz because of tonight’s performance.

The last of the night’s performers was Salena Godden. She read from her essay Broken biscuits. She talked of a childhood of hunger, where ‘we compete to eat’. She spoke of imposter syndrome, of growing up in Hastings and finally finding herself in London.

After a brief and slightly clumsy changeover, the chairs on stage were replenished with a fresh stock of working class arts practitioners for a kind of panel discussion and Q&A session.

Third in from the left was the book’s editor, and the energy behind the idea of it, playwright Sabrina Mahfouz. She began by thanking everyone involved, especially the publishers. “I am literally in another world right now so thanks to publishers Saqi Books” for pulling everything together.

Sabrina had some questions that had been sent in, in advance, to prompt the conversation and each panellist contributed to discussions around the answers.

People spoke about how to tell if you’ve made it – the consensus was that you don’t ever think you have, or maybe that, with low expectations, you keep thinking you have made it but then there’s always one more goal to aim for.

Illustrator Rebecca Strickson said that sometimes you have to find yourself somewhere else. She spoke about moving south, from Lincolnshire to South East London, studying at Goldsmiths (which she didn’t seem to enjoy) searching for the life that felt comfortable to her.

And there was a question about ‘posh’ guilty pleasures. Bridget Minamore spoke about being able to afford an Oyster card and the pleasure of not having to worry about paying to get around London. Others agreed but found it amusing that such a simple thing might be considered a luxury.

There was full consensus around coffee. Why is decent coffee considered a posh commodity? Sabeena Akhtar joked that she’d once been called middle class because she ate hummus… “erm, I think it’s because I’m Muslim”. It was funny but true that cultures are so often appropriated and re-associated.

The lengthiest discussion was around identity. How do we define working class, why do we need to lump it all together? Monsay Whitney spoke with passion about being embarrassed by the way her family lived and by their poverty. She talked about calling on the clichés of working class normality (like roast dinners on Sunday) to hide the reality of her life – “I aspired to be respectably working class”.

Madani Younis, currently artistic director of the Southbank Centre, talked of never fitting in or feeling you belong, He pointed out that 70% of our sector achieved their position through nepotism. In the face of that we all have to fight to get our foot in the door, and that’s why this book is important at this time.
Eventually the evening ran out of time and it was time to wrap up. Sabrina Mahfouz did the honours, explaining that the book was on sale outside (although she was sure she could sort something out if you couldn’t afford it). She said they’d be outside talking and signing, and there will be lots of follow-up events, including intense surgeries where you can talk, one-to-one with someone from your art form.

I bought a copy of Smashing It after the event. It’s a great read with some clear practical advice. I’d very much recommend buying a copy from the publishers; that’s always better than the big online retailers, right?