Superheroes for change have a heart for the arts 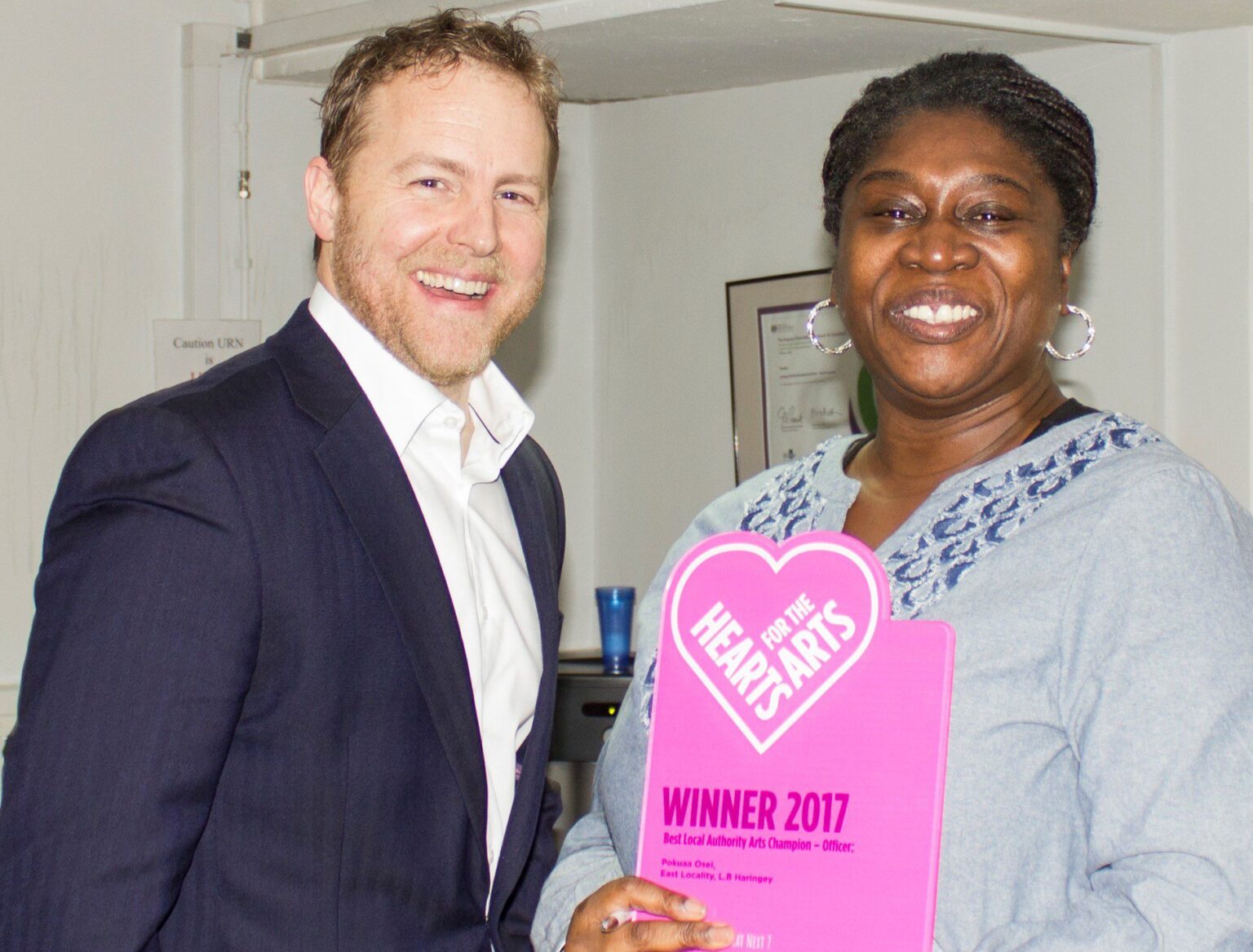 How a small investment from people who believe in the power of the arts can change young people’s lives.

Pokuaa Osei won our inaugural Hearts for the Arts Award for Local Authority Arts Champion: Officer for her work on the Family First Nights, a project partnering the London Borough of Haringey with Mousetrap Theatre Projects enabling children and families to experience live theatre for the very first time.

At a recent event for Mousetrap Theatre Projects, NCA Chair and Mousetrap Patron Samuel West read this piece from Pokuaa on the lasting impact this work has had. Pokuaa writes:

“Whilst working with Haringey parents as a Family Learning Tutor I met a teenage boy from the local area, who was attending my literacy class.  His mother was at her wits’ end with her fifteen-year-old son, who was on the verge of permanent exclusion, hanging out with the wrong crowd and possibly involved with gangs. For whatever reason, he and I struck up a good relationship.

An opportunity to dare to dream, to dare to open that door to their imagination

In addition to my teaching role within Haringey, I’m also involved as a volunteer with MouseTrap Theatre Projects, a charity which helps families and young people see live theatre in London, and helps them to engage creatively with it. I took this young man and a group of others to see Stomp.  It was the first time he and his group of ‘Too Cool for School’ young people had left the Borough of Haringey; the first of many firsts for them, a group of young people aged 13-15:

This experience left all the group, in particular the fifteen-year-old son of my student, speechless; bear in mind he was the most negatively vocal of them all, making statements like ‘Theatre is not for us, it’s for the posh’ and ‘I feel it in my bones Miss, this is going to be rubbish; I know coz a feel it in my bones’.  Many other colourful statements came out fast and furious as we made our journey on the Piccadilly line to Central London.

Upon entry into the Ambassador Theatre the young people were immediately struck by the grandeur and splendour of the interior. They were seated, lights went down and the show begun.  To this day, the image of sheer amazement and delight on the faces of these young people – many of whom have been exposed to some of life’s harshest experiences, forcing them to forget they are children – warms my heart and brings tears to my eyes. It was a magical moment, that allowed these young people the opportunity to dare to dream, to dare to open that door to their imagination.

Thanks Miss, that was alright.

When the show ended and we made our way home, the celebratory energy held as we had walked through Leicester Square.  Then it slowly shifted to a sombre mood as the reality that this experience was, as one of the young people described, a ‘one-off’. When we arrived back in Haringey, my Family Learning Student’s son approached me to say, ‘Thanks Miss, that was alright’.

A few years later a man came up to me in the street and said, ‘Hi Miss’.  It took me a few moments to realise this was the same boy I took to see Stomp in the West End.  He then told me that he was studying at Mountview Academy of Theatre Arts.  That is why we do what we do.  Even though the theatre may only be physically a few miles away from Haringey, access for some can still be completely out of reach.  The small investment made in this person by people who believe the arts can change lives, enabled him to see new possibilities and grow a talent which may otherwise have stayed hidden forever.”

Is there a person or project making a difference to the arts in your local community? Why not nominate them for a Hearts for the Arts award?