Children and the arts

Last night, our Chair Samuel West gave a speech at a special event about arts in schools at the Royal Albert Hall, hosted by our friends from Children and the Arts. 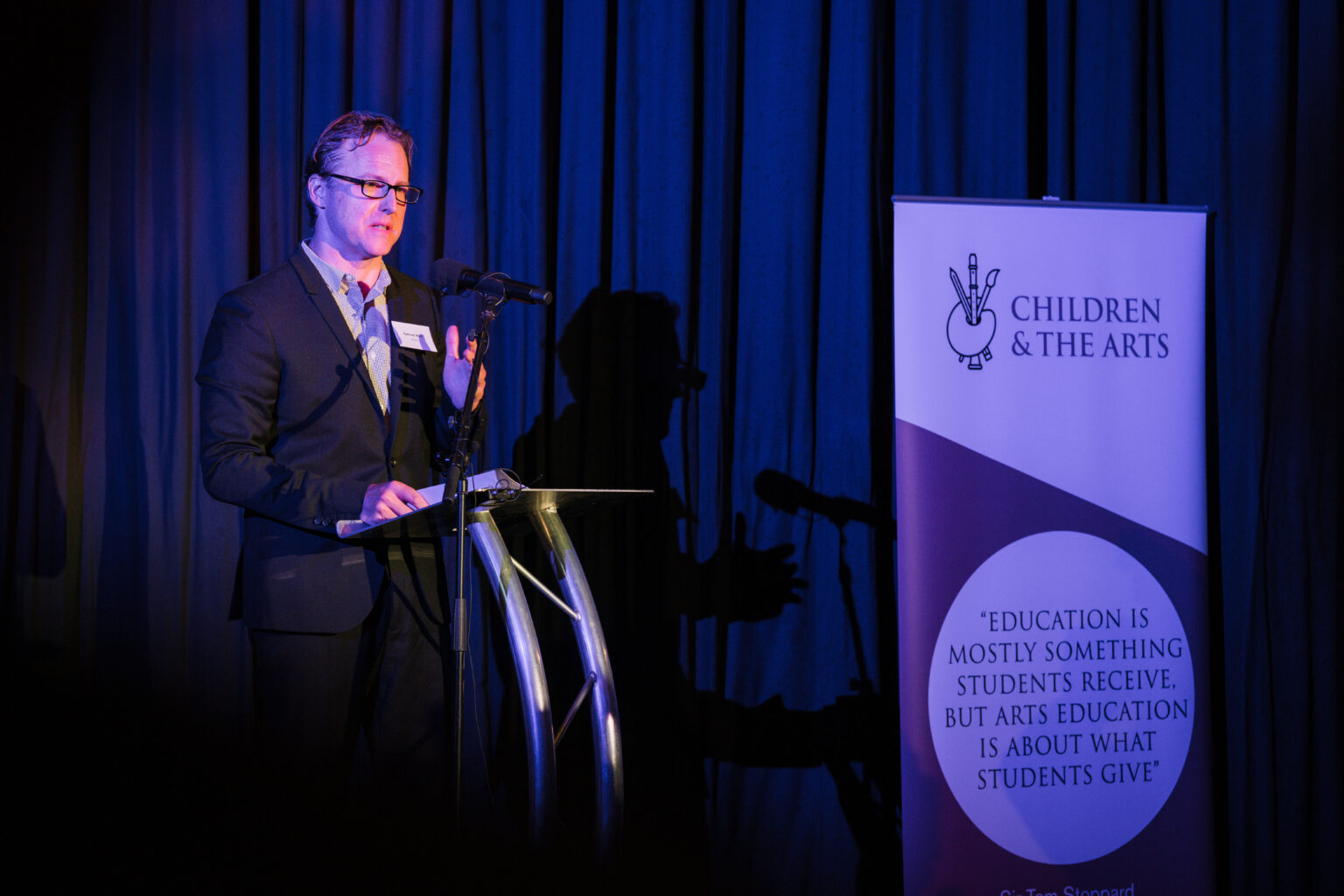 “We must safeguard something as valuable as forests: potential”

Many thanks for Children and the Arts for the invitation to speak at this event, and for sharing this video with us.

Hello. Samuel West, Chair of the National Campaign for the Arts. We campaign for more public investment in the arts because we believe that the arts are for everyone and make everyone’s lives better.

The NCA runs an awards scheme called Hearts for the Arts – a celebration of cultural champions within our Local Authorities and the projects that place the arts at the centre of community life. Last year we gave one to Pokuaa Osei, who works with Mousetrap Theatre Projects to take people who have never been to the theatre, or sometimes even left theirLondon Borough, to West End Shows. This is from a story she told me about a visit to Stomp at the Ambassadors Theatre. The student she talks about is a teenager from Haringay, who was attending her literacy class. His mother was at her wits’ end with her fifteen-year-old, who was on the verge of permanent exclusion, hanging out with the wrong crowd and maybe involved with gangs.

“When the show ended and we made our way home, the celebratory energy held as we had walked through Leicester Square. Then it slowly shifted to a sombre mood as the reality sank in that this experience was, as one of the young people called it, a ‘one-off’. When we arrived back in Haringey, my Family Learning Student’s son approached me to say, ‘Thanks Miss, that was alright’.

A few years later a man came up to me in the street and said, ‘Hi Miss’. It took me a few moments to realise this was the same boy I took to see Stomp in the West End. He then told me that he was studying at Mountview Academy of Theatre Arts. That is why we do what we do. Even though the theatre may only be physically a few miles away from Haringey, access for some can still be completely out of reach. The small investment made in this person by people who believe the arts can change lives, enabled him to see new possibilities and grow a talent which may otherwise have stayed hidden forever.”

Now I know everyone here believes in the ability of the arts to spark that inspirational change. But we’re here to shout for the ordinary stuff too – art for people who might not become actors; easy, affordable access to the beauty and complexity of art. We’re here to talk about things that matter: diversity, access, the democratisation of culture.

The stated aim of Children and the Arts is to “unlock the arts for more young people”. Unlock is a good word; to those outside them, the arts can seem unreachable, inaccessible, not for them.

I’ve got a year-old daughter who has recently learned to turn the pages of a book by herself. The look on her face as she realises that this simple action opens a new world of possibility at every turn, is intoxicating.

There’s a common idea in child psychology that the mother doesn’t bring the breast, the child creates it (stay with me). When she’s hungry, it makes more sense to a baby that her need for a breast full of milk magically produces one, than that the world is full of lots of people, only one of whom chooses to come over and feed her. That’s a much more complicated and frightening idea than omnipotence. It also happens to be true.

We don’t want a baby to have that omnipotence all their life. If at the age of 15, a child thought the world revolved around them and they magicked things into being, we’d think that was quite disturbed. So what happens in the gap?

There’s a process of discovering that you are just one part of the world, with a bit of control over some things in it, and none at all over most of them. That could be terrifying; a shattering experience, or it could be one which fills you with the joy of possibility.

One of the things which makes the second option more likely, is art. Because art works a child’s interaction with the world in both directions. If a child creates a piece of art – if they do a dance or paint a picture or sculpt a pot or make a costume, some bit of themselves goes out into the world, and they matter. They’ve made their mark. Like a graffiti artist tagging an underpass – just to say I was here, I exist.

But that equation also works in the other direction. If you’re a teenager and you’ve been chucked and you go to see a film to cheer yourself up or even if it’s raining and you go into an art gallery until it stops, the world suddenly doesn’t revolve around you and your problems quite so much. A child experiencing art is reminded that their own immediate circumstances are not all they have. That they are human, and therefore extraordinary.

Your own personal circumstances may be very difficult. You may be poor, or homeless, or abused; you may have been excluded from school. Extraordinary may be the last thing you’re feeling; any connection that makes you feel part of something bigger is useful.

Now creativity in schools is in freefall. This is the Arts Index, the NCA’s healthcheck for the arts in this country, which we publish every two years. Since we started the Index in 2007, creative arts GCSEs have fallen by 20%. 93% of teenagers say they love music, but the proportion of children participating in music is now at its lowest level since records began. It’s an excellent thing to say that ‘Children should be reading 50 books a year’, but we hear it from the same government who have closed more than 500 libraries. A child learning to read can devour a new picture book every night (trust me, I know). I hope we’re not now being governed only by the people who can afford to buy those books, not borrow them. That would be not just a failure of government, it would be a failure of imagination.

“Nurturing creativity in the young is like installing the software on which all the other information they are absorbing will run. Drama – for instance – nurtures articulacy, self-confidence, stage presence, empathy, emotional intelligence and an understanding of conflict. Will studying Drama get a child a job as an actor? Probably not. Will it give them the skills to shine in any job interview which comes their way? Almost certainly.“

We will need imaginative people in the future. We will need people who have trained this muscle of imagination so that it’s strong and supple. The Prime Minister has spoken of the need for us to be an “imaginative and creative” nation in order to deliver a successful Brexit. With arts GCSEs having fallen a fifth in the last decade, we might ask where she intends to find the imaginative, creative citizens of the future.

If you’re good at football in this country, you will get a trial. Boy or girl, there are plenty of scouts out there who’ll want to sign you up. But if you think you might be a good designer, or playwright, or film-maker, or poet; where do you turn? Those skills are no respecter of postcodes.

All of us must have the chance to become who we can, no matter where we live, where we went to school and how much our parents earn.

In the end, it’s not “art for art’s sake”; it’s art for our sake. We must safeguard something as valuable as the forests: potential.